UA-82859136-1
Since guitars were first developed, round about 150 years ago, people have been trying to make devices that form chords on them. After all, how hard can it be? Lots of people can make chords without any help - and they make it look so easy. It turns out that making chords is a really complicated thing to do (and hands are incredible things!), because chords need strings to be pressed in various positions on the fret board, and some of the fret positions are used by more than one chord, and the strings have different thicknesses and tensions - and it's all hanging on top of a delicate musical instrument.

All sorts of interesting contraptions have been patented over the years, that involve electrical solenoids, compressed air or hinged plates of complicated shape. I applaud them all - because I appreciate how hard it must have been for all of those inventors. I started trying to make my own version work way back in 2005 and it took me 59 versions and eleven years before I got one to work satisfactorily!
Anyway, the summer of 2015 was awful, with no honey harvest at all - which is bad news if you're a professional beekeeper and rely on honey sales for an income. Then followed a long and miserable winter - and I was forced into rethinking how to make a living on our little smallholding in the west of Ireland. I didn't want to go back working as a jobbing carpenter - getting too old for that - but what else could I do? While I was thinking I went back - yet again - to the chord-making machine project. This time I had the huge advantage of having a brilliant little CNC machine called an X-Carve, by Inventables. It took a while to get the hang of it but I was able to make some serious progress on the machine. By the spring of 2016, after another few hundred hours of work and frustration, I finally put together the first Chordelia that actually worked.
Since then I have been working on the way the machine looks, and on how to produce them in small quantities - which threw up lots of interesting challenges. And all these challenges (where to get the right timbers, how to make sure all the parts are identical, what sort of finish to use, etc.) had to be overcome without resorting to spending money. It took till the end of June 2016 before the very first Chordelia Number Five production model came off the short but convoluted production line. (I promptly sent it to my niece and her family in England for serious testing.) 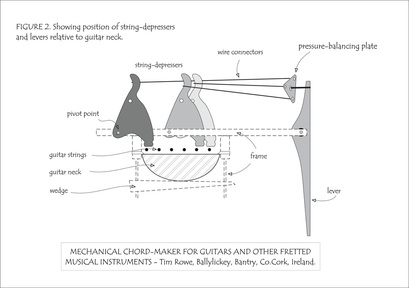 Part of the patent application for the Chordelia chord maker
In the meantime, I considered getting a patent on the invention. Patent applications are expensive and take a long time to put together, and there's no guarantee that the patent will actually be awarded in the end. But having laboured through all the existing patents for chord-makers, I was (and am) convinced mine is quite different from them all. So I went ahead and drew up detailed diagrams and the initial claims and descriptions, and went looking for a Patent Attorney. I eventually found one in London (Jon) who not only understand what was so special about the design but agreed special terms to translate all my straight-forward descriptions and abstracts into the necessary(!) legaleze. Thanks, Jon.
So, now we have a Patent Pending. Which covers 'a chord-making devise for fretted musical instruments'. (The same mechanism could also be used on other instruments like banjos and ukuleles.) I hope one day someone would like to license this and start making these machines on a more serious scale than I could ever manage. Because that would bring the price down and make them more affordable to all the people who would benefit from having a Chordelia in their lives.
google-site-verification: googleb2caed15b35863b4.html UA-82859136-1